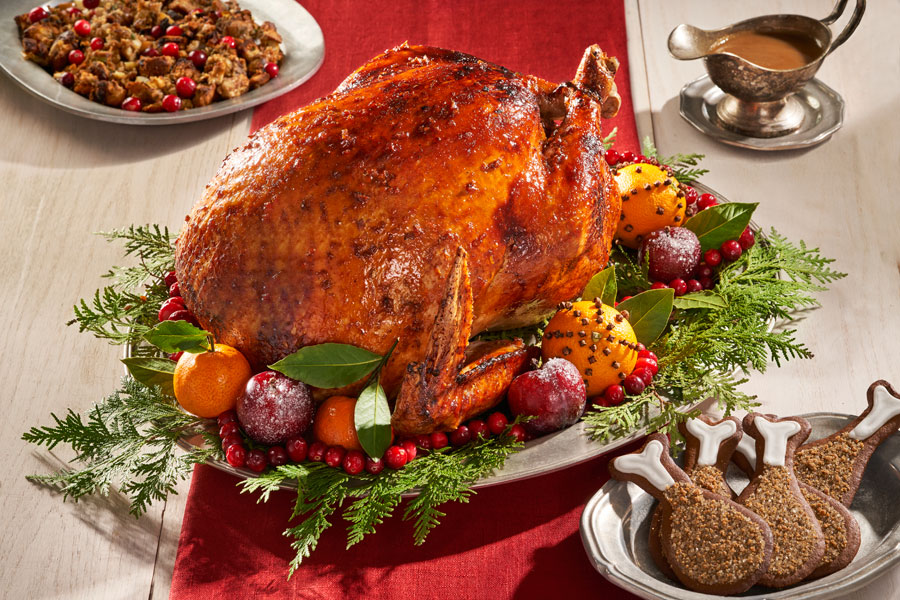 This is not my normal post but just saw this compliments of Zoomer magazine and will definitely want to try it this year.

½ bulb of fennel, sliced into ¼” slices

Drippings from the turkey pan

Salt and pepper to taste

You will also need:

In a large skillet over medium high heat, add oil, diced onion, diced fennel, celery and apple; sauté until tender, 5 to 8 minutes.
Scrape vegetables into large mixing bowl. Add brioche crumbs, raisin bread cubes, melted butter, stock, salt, pepper and parsley.
Using a large spoon, combine ingredients until well blended.
Stuff the cavity of your holiday turkey with ¾ of this dressing, reserving the other ¼ for the upper end of the bird.

Lay the onion slices, orange slices and fennel on a large rimmed baking sheet.
Lay the turkey on top of the vegetables, breast side up and tuck the wing tips under the turkey. Rub canola oil all over the turkey and season evenly with salt.
Cook on the middle rack in 350 F oven for 1 hour, 15 minutes.
Meanwhile, get started on the glaze. Add the canola along with the shallot, ginger and garlic to a pot set over medium heat. Cook for 3 minutes until shallot is soft and translucent. Add the remaining ingredients for the glaze and bring to a simmer. Simmer on low for 8 minutes. Pour glaze through a sieve, pushing the liquid through with the back of a spoon. Discard the solids.
Insert a thermometer into the thickest part of the thigh (do not hit the bone). When the temperature reads 140 F, begin basting the turkey with the glaze every 10 minutes.
Once the thermometer reads 165 F, remove the turkey from the oven. Cover turkey and let rest for 20 minutes.
Prepare gravy by pouring all the drippings from the turkey pan into a medium pot. Add remainder of glaze along with apple cider, water, allspice, ginger and cinnamon. Bring to a simmer and cook for 4 minutes.
Whisk cornstarch with the water until it is fully dissolved. Whisk cornstarch slurry into gravy and cook for another 2 minutes.
Carve the turkey and serve with gravy.