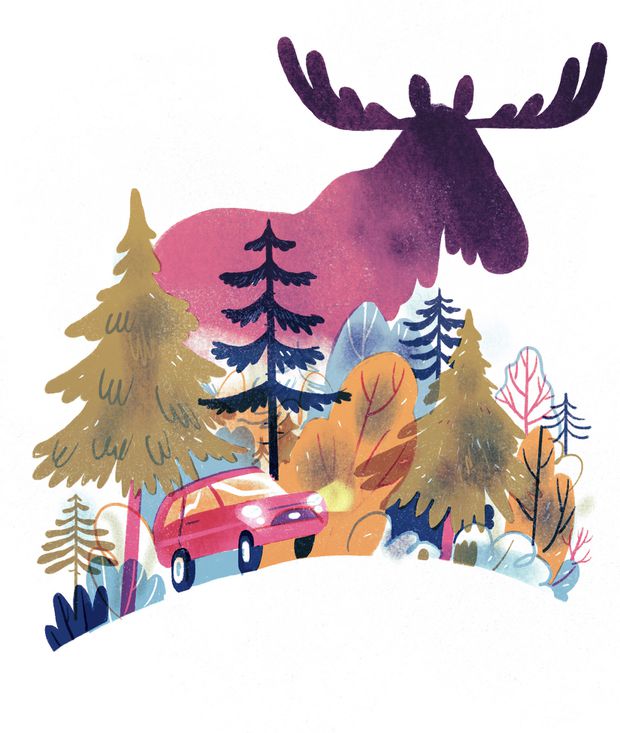 First Person is a daily personal piece submitted by readers. Have a story to tell? See our guidelines at tgam.ca/essayguide.

The instant before impact resembled a cruel magician’s trick. Suddenly, the black cape of the early September morning was swept away, and there she was. No time to swerve, no time even to brake. Her face simply appeared, frozen in the upper right-hand corner of the windshield, the full mass of her body below. The whiteness of her ears stood out against the darkness. Her eyes, confused and scared and alive, stared back over her right shoulder, directly into mine.

As quickly, it was over. I brought the car to a stop in the middle of the desolate highway in Cape Breton Highlands National Park, engine still running. The rearview mirror lay on the floor of the empty passenger’s seat, along with so many tiny pieces of shattered glass. The moose had rolled, diagonally, onto the hood and then over, pushing the roof backward like an accordion, yet somehow sparing the driver’s side from the worst of the damage. Without pausing further to think, I fled, speeding my way down North Mountain and toward civilization and safety.

I had to stick my head out the window to see the road ahead, as the wind blustered in through the cracked and mostly dislodged windshield. Fluid was leaking from under the hood onto the pavement, but I drove on anyway. I figured if I could just get to the nearest town, or even to a service station, I would be okay. Funny, the thoughts that go through the mind untethered in the most traumatic moments, when time seems to slow to a halt. It was not long until the engine sputtered and died of its own accord, and I was forced to pull over.

Shortly thereafter, a pickup travelling in the other direction came to a stop. The driver glanced first at me, then the car, stroking his heavy white beard all the while. Miraculously, I did not have a scratch.

“You are some lucky to be okay. I have hit two of them in my time. I know the feeling. Hop in and I’ll take you back to the house. We can help you sort everything out.”

I saw the sun rise on the watery horizon as we approached the farmhouse, though I was not in the mood for pictures. On arrival, his wife fixed me a coffee and began the process of trying to locate the nearest tow truck. Not the easiest feat in such a rural area on a Sunday, especially at that crazy hour. After placing a few phone calls and waking up a few people, she found a guy in Chéticamp, 75 minutes away, who agreed to the job.

The tow truck arranged, reality began to settle in. I was more than 450 kilometres from home, and could not really smell or taste the fresh brew. I sent an e-mail to a friend (at 6:42 a.m.) who happened to be in the area that weekend, explaining the situation: “I’m fine, but car is totalled. Near Cape North at a friendly Cape Bretoner’s house. Might be looking for a drive back to Halifax. Give me a call when you get this.” David got in touch immediately, generously offering to collect me later that day, despite it being two hours out of his way.

“Is there anything else you need?” the woman asked. Still in a bit of a state, and with some time before the tow truck’s arrival, I found myself wondering aloud if I could take a shower. She chuckled and went to find a clean towel for me to use. “The bathroom is upstairs on the right. Don’t mind the mess.”

“Well, it’s not like you could have known I’d be visiting this morning,” I said.

“To be honest, I don’t think it would have mattered much if I had,” she replied.

It felt good to laugh. When I was ready, we drove back to the highway. The tow-truck driver took a hard look at the car, and turned back to me. “It’s clear someone has decided your time is not up yet,” he smiled, looking to the sky. His buddy helpfully suggested I call the RCMP and park staff to report the incident.

He also reminded me I should call my insurance broker to start the claims process, repeating the same advice I would hear from other locals: “Remember to choose your words carefully,” he said. “You didn’t hit the moose. The moose hit you.”

They loaded the Mazda on to the flatbed and I climbed into the front seat between them. Off we drove, back toward the scene of the accident. The moose’s body was in the ditch. They said she had been killed on impact. Did I want to stop and see it? It seemed the necessary thing to do.

Later, people would ask if I had thought to claim an entitlement to the moose meat. All I remember feeling in that moment was a sense of sadness and perplexity, at the unfairness of the trivial coincidences that had brought our two lives together in such a tragic manner. The moose had not hit me (turns out the insurance company did not care either way). I had intruded on her native habitat at precisely the wrong second, based on a fleeting and whimsical desire to watch the sun rise at Nova Scotia’s most northerly point near Meat Cove. She had suffered the full consequences of our unlikely convergence.

It has been more than a year now, and the sight of her eyes just before our violent impact remains vivid when I close my own and recall the scene – like an old Polaroid snapshot. How lucky you are to be alive, everyone says, after seeing pictures of the demolished car and hearing the story. Maybe so. Nothing involving the interruption of such an innocent and peaceful life feels lucky, though. The fateful randomness is just another reminder of how completely everything we think we know could change, in a flash.

One thought on “The moose came out of nowhere, and I’ll never forget the impact”